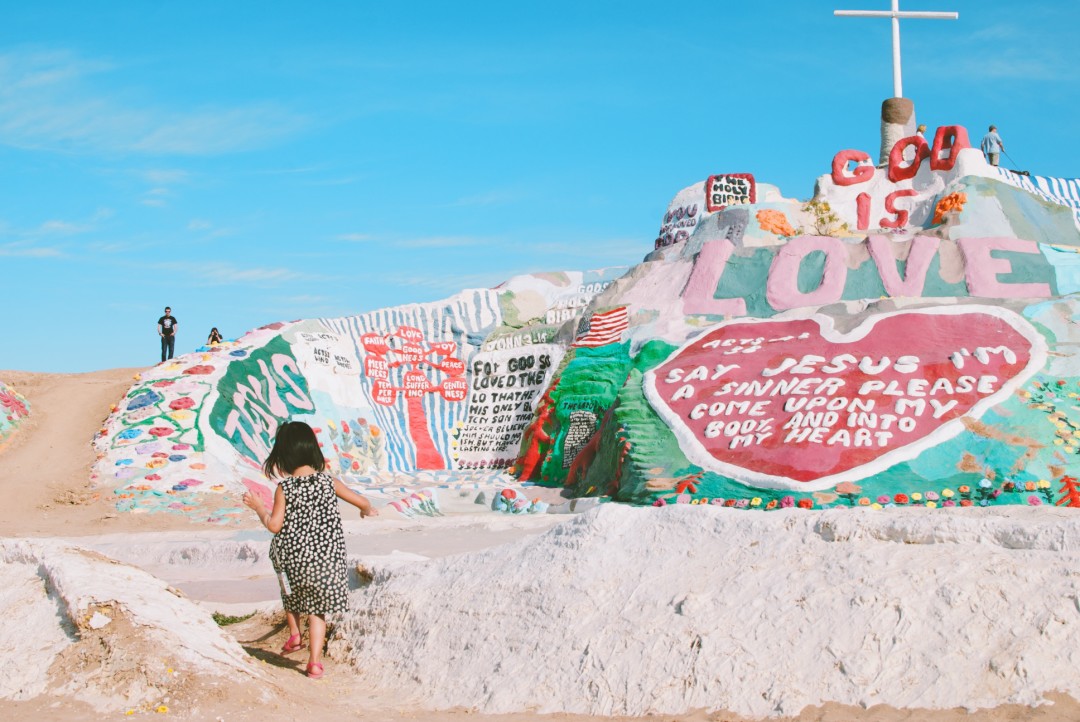 Leonard Knight spent 28 years building, Salvation Mountain, a self-funded tribute to god using adobe clay, hay and donated paint. He lived on-site in the back of a truck, building or patching his mountain daily. Salvation Mountain is proof positive that love and faith – some may even say, madness – compels people to do wonderful and inspiring things. Visiting Salvation Mountain was as moving as seeing Gaudi’s La Sagrada Familia or Michelangelo’s Sistene Chapel ceiling – even more so knowing that it was built in our lifetime by one man with no institutional funding. It’s truly an inspiration. This was Luna’s favorite stop on our Palm Springs trip. She happily calls it the “Rainbow Mountain”. 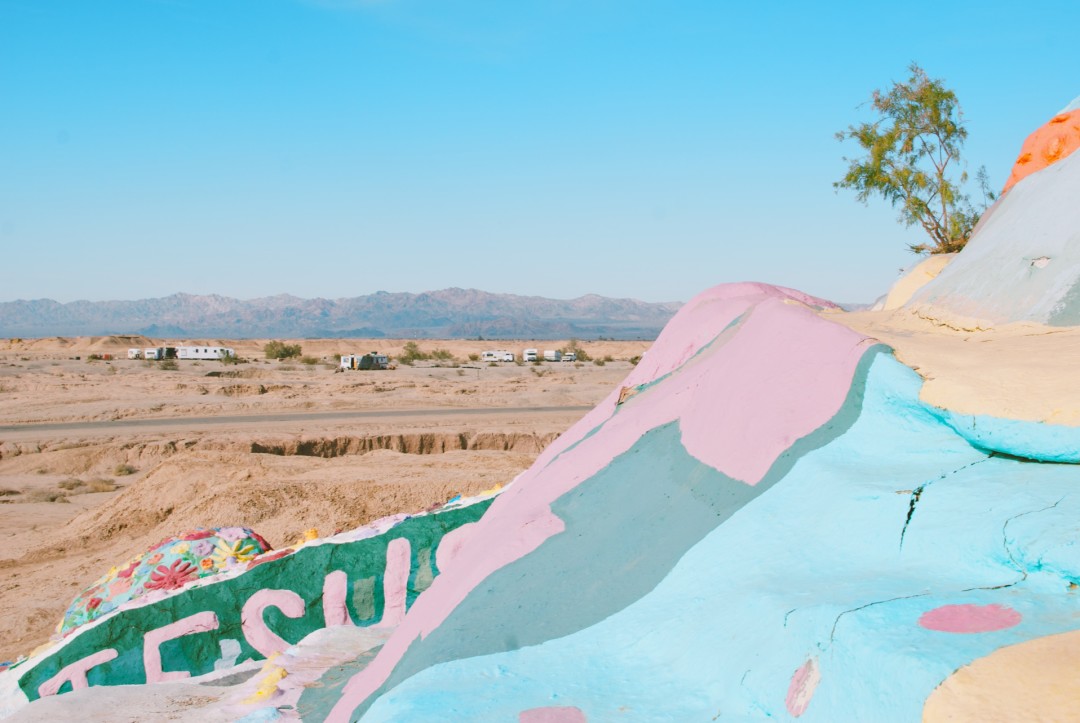 The mountain’s vibrant rainbow of colors creates a striking contrast against the desolation of the surrounding desert. Nearby is Slab City, an off-the-grid community of desert residents and part-time RV snowbirds. I first learned of Slab City and Salvation Mountain from Sean Penn’s 2007 film, Into The Wild. In act two of the the film, Christopher McCandless, the disenfranchised protagonist travels to Slab City and finds a like-minded community who, like himself, have rejected mainstream culture. There’s a scene in the film where the real Leonard Knight impassionately explains his message of love to the films characters. Leonard’s message of love, transcending religion, reaches out to everyone. I was moved by the scene. Years later, I had forgotten about the mountain until seeing beautiful images from adventure-seeking desert travelers on Instagram. We felt compelled to make a pilgrimage to experience it ourselves. 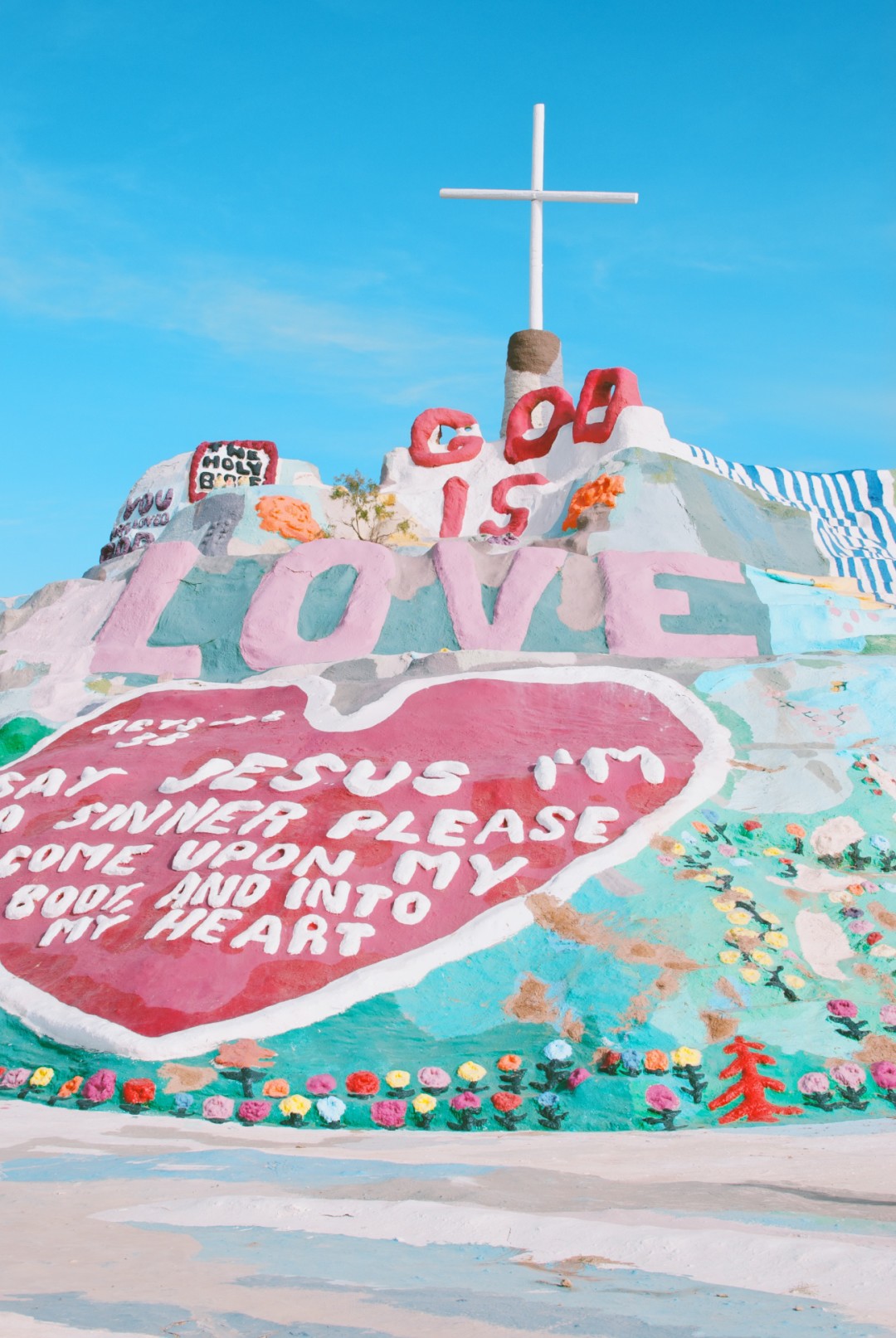 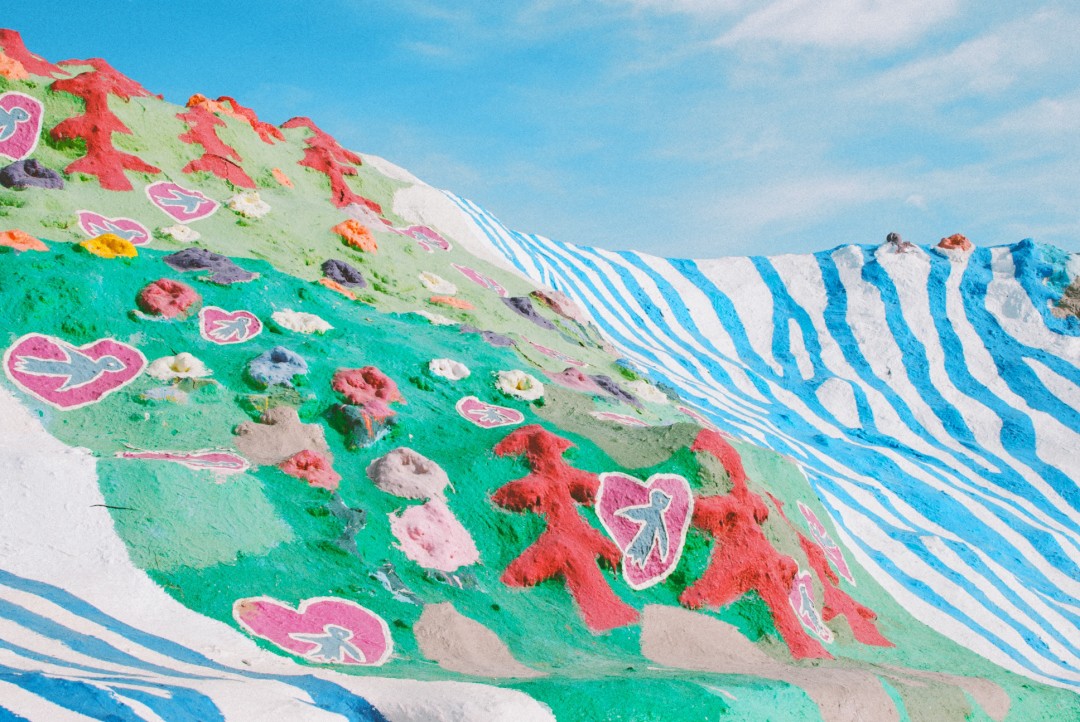 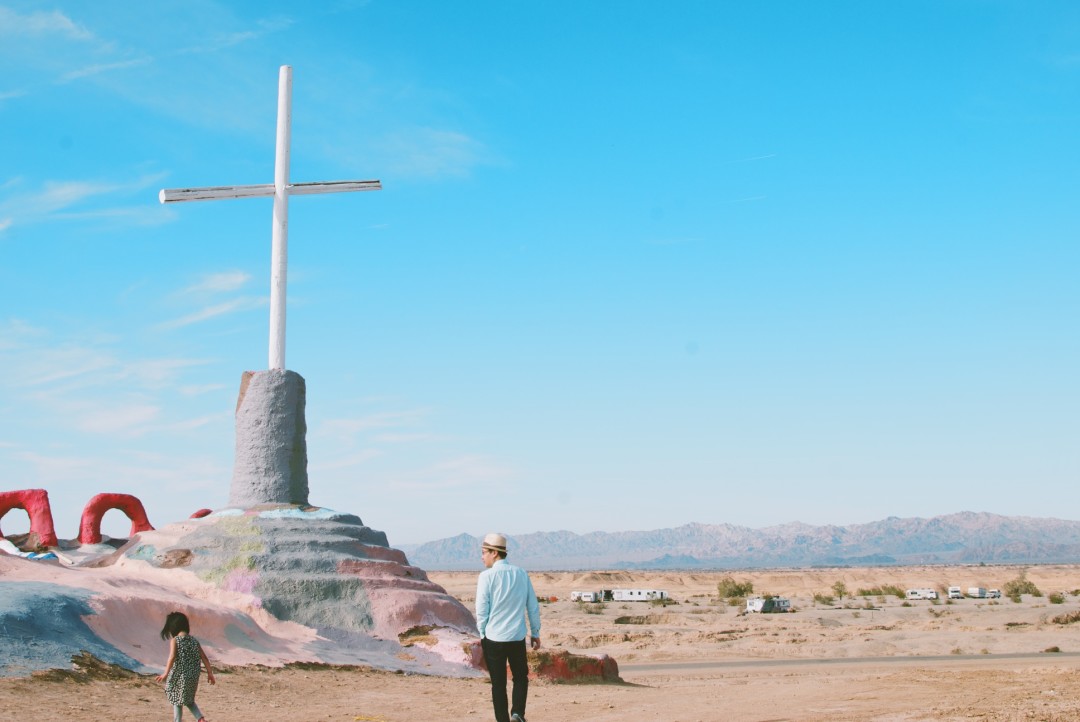 Climbing the rainbow-covered slopes was a magical adventure. Luna, free of fear, immediately wanted to run up the mountain. The patchwork of colors and soft-curves of the mountain were pure joy for our four-year old. There were no branded characters, themed rides or admission fees. It was a genuine life-sized fantasy land. Quirky, folky, “outsider” art to us. Wondrous and inviting to Luna. It made me wonder: why do we build amusement parks when the whole world is an amusement park? Leonard Knight, you are a genious. 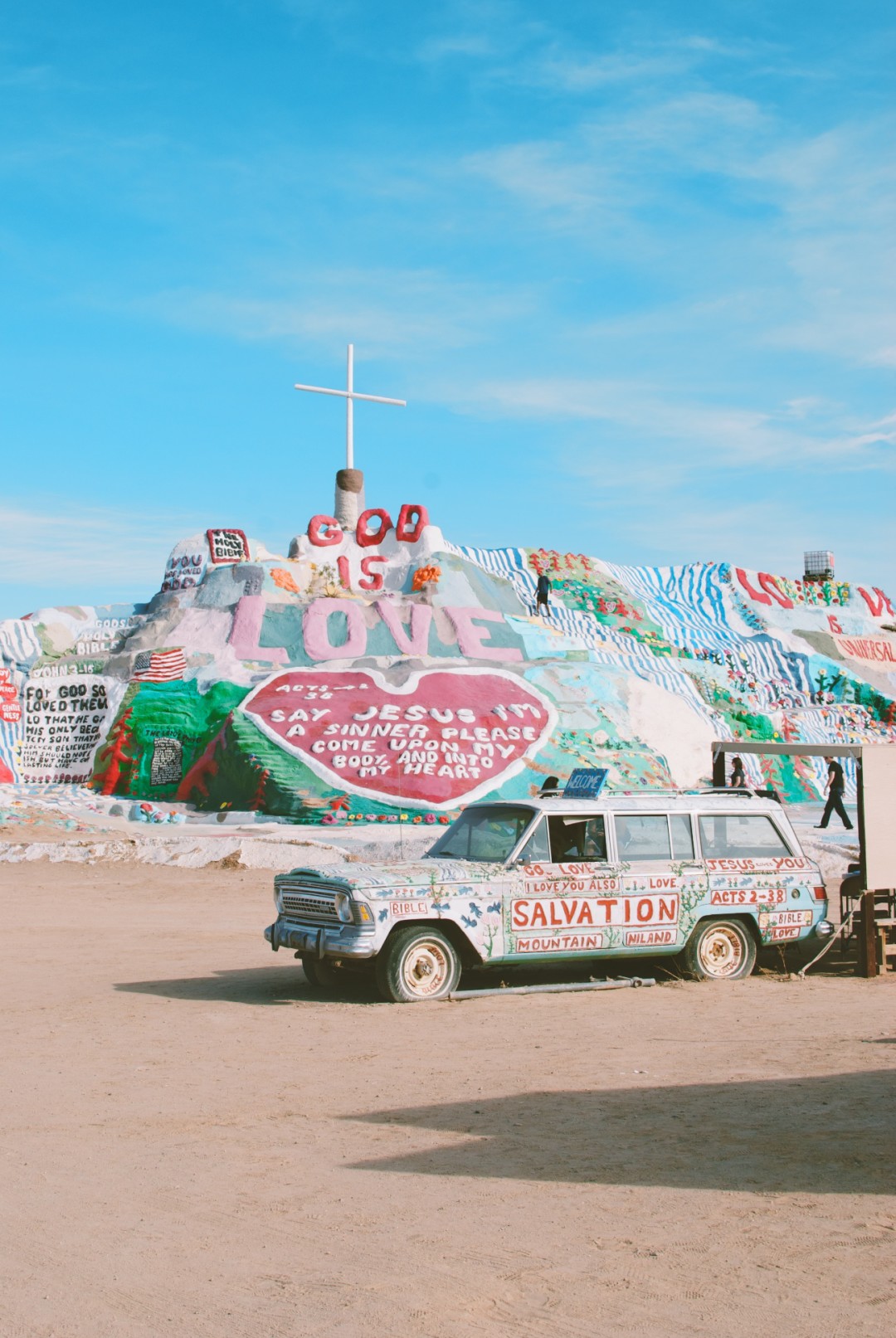 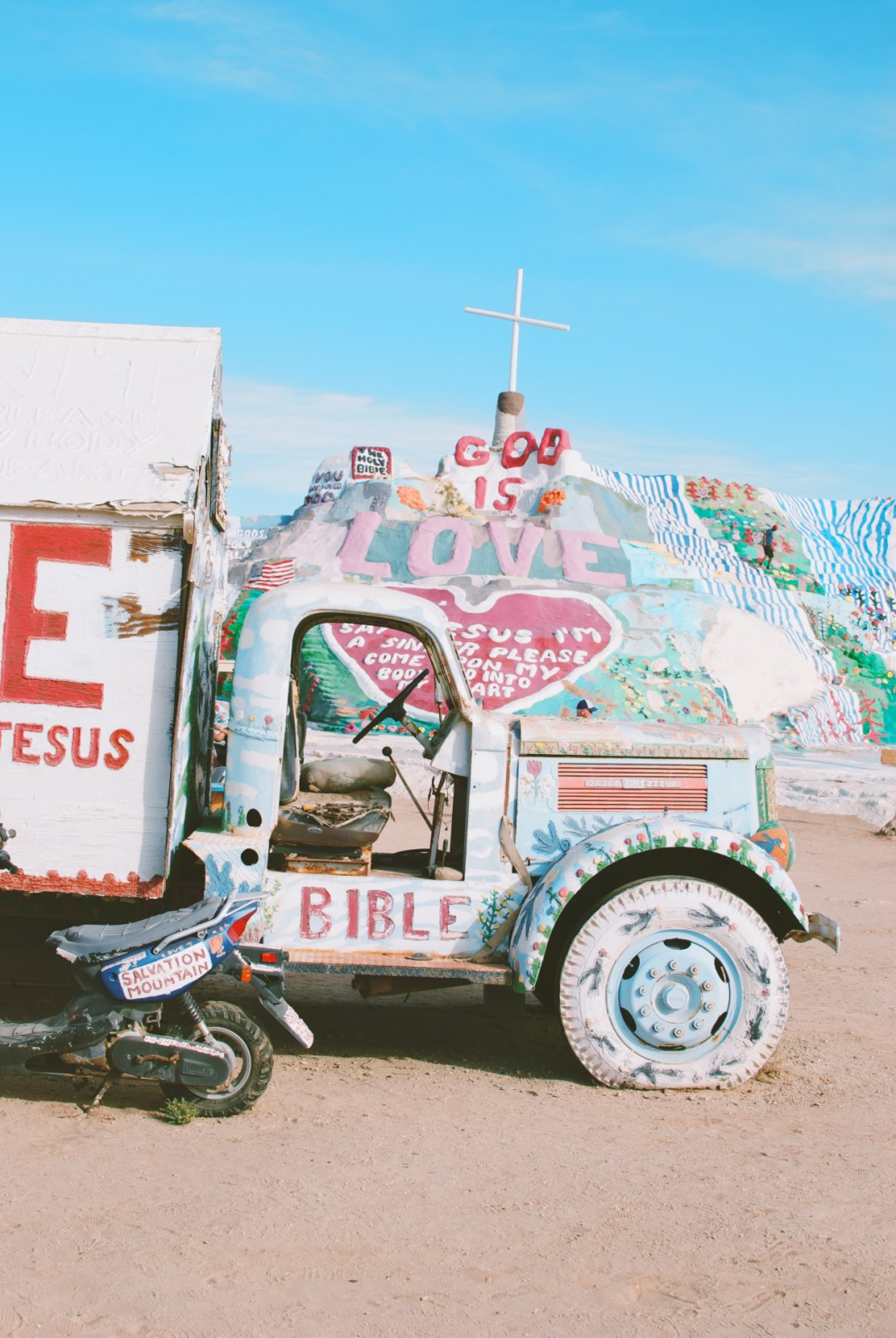 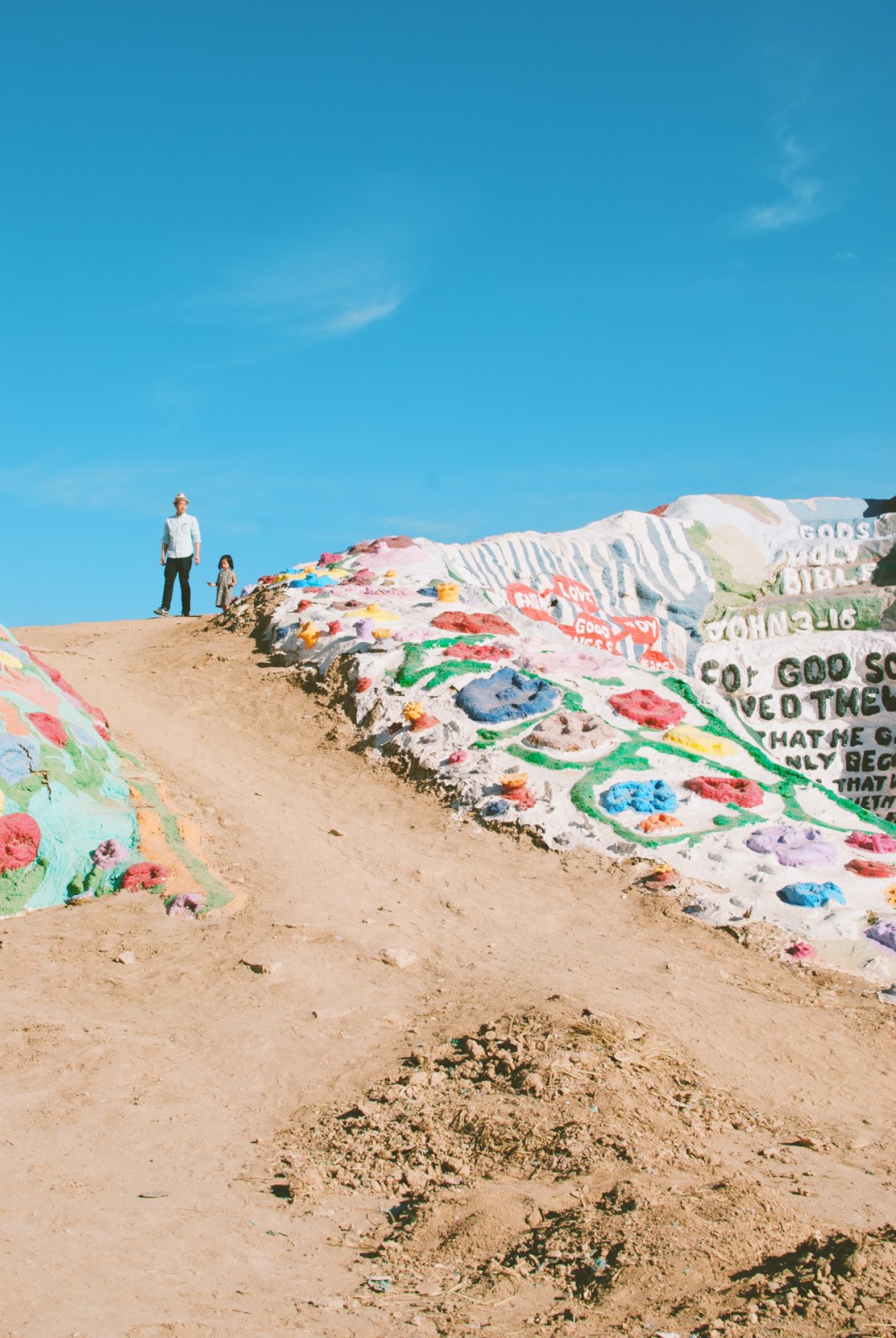 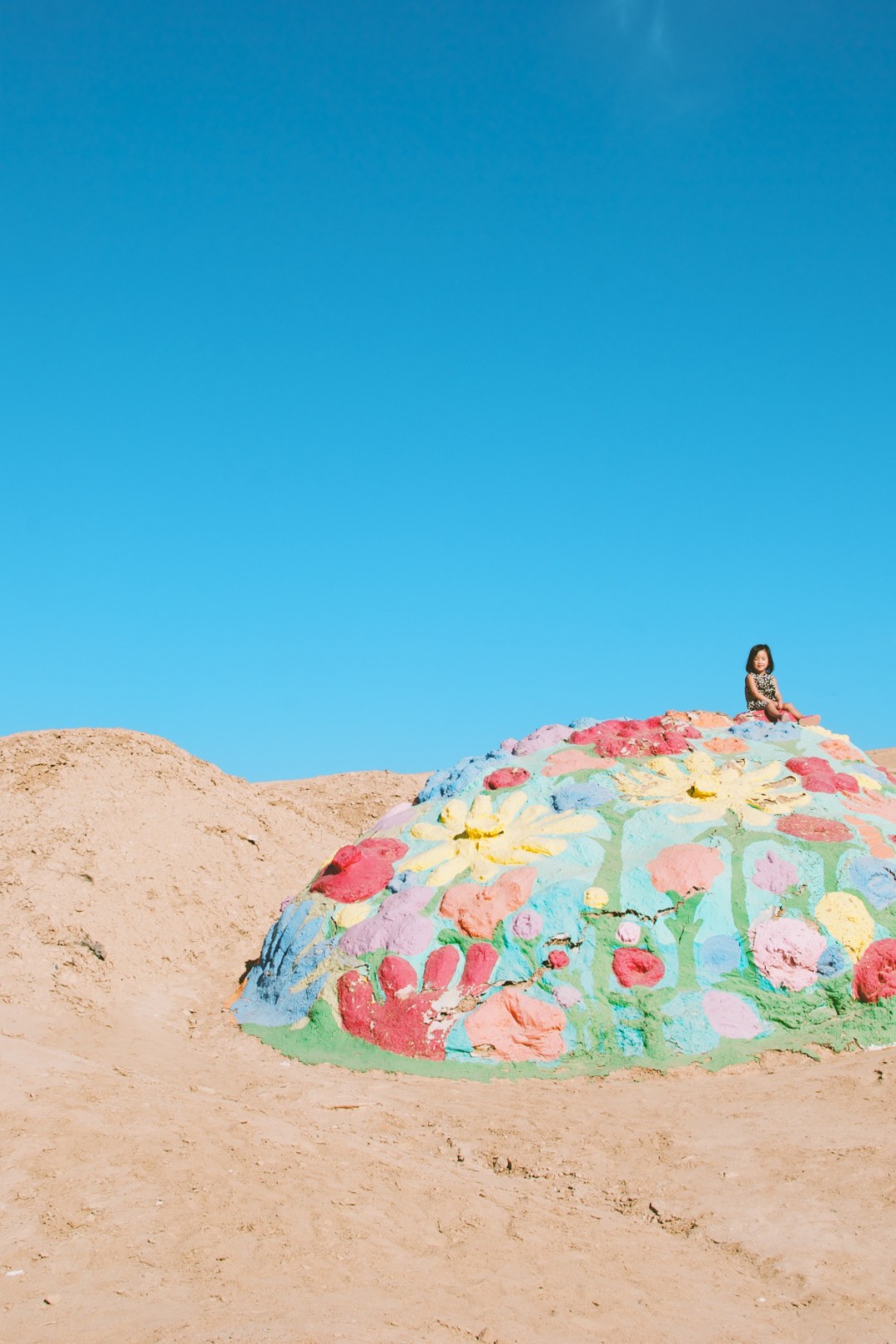 American folk art is found in all corners of our nation. Perhaps one of the least likely locations would be the desert where Salvation Mountain is found. Leonard Knight’s artwork is a national treasure, a singular sculpture wrought from the desert by a modest, single-minded man. It is a sculpture for the ages–profoundly strange and beautifully accessible…
– Barbara Boxer